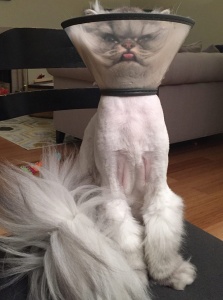 Sometimes as Vets we have to treat our beautiful patients with methods that don't always go with their looks. I recently found this photo of a Persian cat named Albert. Thanks to his hilarious reaction to being made to wear the infamous “cone of shame.”

Albert had a minor surgery to remove a cyst, which necessitated that his body was shaved. It also meant that he would have to wear an e-collar to keep him from pulling out his stitches. His owner, Jean Baker of Portland, Oregon, captured Albert’s reaction to the come at home as he tried to lick inside the cone. His clear displeasure, paired with his unusual shaved appearance, made for some very unusual photos.

Many dogs and cats need to wear e-collars after surgeries or when receiving stitches. The collars physically prevent the pets from licking or chewing their wounds. Frequently licking a wound can slow its healing and lead to infection, and if a pet pulls his stitches out too early, he will need a return trip to the vet to put them back in. Unfortunately, most pets detest the cone of shame.

Don’t worry – Albert didn’t have to suffer the cone of shame for long. Now he is wearing a “recovery suit” – a protective jacket which keeps him from being able to access the wound.